We have a color!  It has taken more than two months and 20-plus paint samples to finally find one that we both think looks right.  We started with whites. I thought that white-ish stark walls would really make the bright colors pop, but then I started to worry that too much white would make them pop too much.

We even went as far as buying a 5 gallon bucket of Glass of Milk by Martha Stewart before I chickened out of white.  We ended up using it in the boys rooms, so it didn’t go to waste.

I played with the idea of a light grey next, then taupe and beige. I mixed my own colors one day trying to get just the right feeling.  What makes it even harder is that I worry too much about stuff that really doesn’t matter.  I always have.  Is grey too trendy?  Is it too cold?  Why does the beige always look peach?  How did I manage to custom mix the exact color that is already on the wall?  Maybe these colors aren’t fun enough.  Does this color say mid century modern surfer?  Am I being too trendy by trying not to be trendy?  Will the kids think “oh remember when mom went through her (fill in the blank) phase”? Will this color be enough to unite all the rooms while still fading into the background so the art and accents can pop?  Yes, I’m crazy.

I even asked the super nice people on the Friends of Atomic Ranch Magazine what they thought.  The popular colors there were white, grey, a shade of green, and turquoise.  So today we made a trip to Home Depot and collected even more samples.  Brighter colors than what we had been originally thinking.  I picked out a pale green, pale turquoise, a pale yellow and even a pale pink (who knows, it might be amazing).  Come home and slapped them on the “sample wall”. 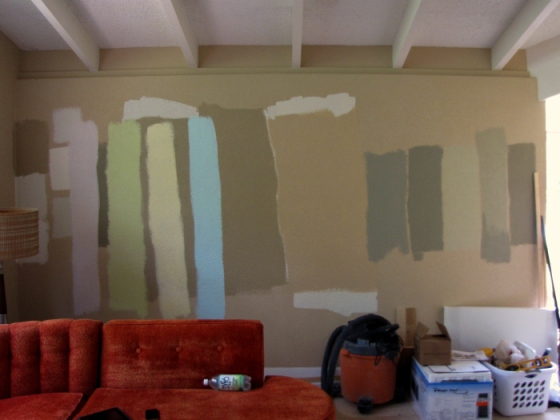 We’ve been using this wall as our sample wall so that we could see the colors with the couch.  This picture makes it look so much more red than it really is.  I don’t think we will ever get an accurate picture of this couch.  You might notice the construction pile is much smaller now that we are, fingers crossed, a week away from being done with the construction part of the kitchen.

We also wanted to see the colors against the fireplace.

The pastel colors that I picked up today just aren’t right.  Not the look we are going for.

NOTE from Jamie: For two months we couldn’t agree on a color. It’s probably the most we’ve ever been in a disagreement about something. In the 1950s, colors were colors. Solid colors. Blue was blue. Not Smurfette blue summer-breeze! I found a color palette online and wanted to stick to a deep, rich solid color. To avoid Morgen’s flavor of the week paint scheme, I would just wait her out. But after a couple of weeks, I realized the colors – weren’t getting any darker. So finally, in the interest of getting some paint up on the walls by Thanksgiving, we agreed that if she picked out five finalist paint colors, I would pick the winner. After painting carnival-blue cotton candy and banana creme pie on the wall, I was happy she left a couple previous samples in the running. I should have snatched up her idea weeks ago. The color we picked really helps accent the furnishings and lets everything in the house shine.

The color is one that I custom mixed, so I guess we get to name it.  Let’s call it Groovy Grey.

I guess the hard part is over.  Now we just need to paint the inside of the house.  Thankfully the “sample wall” offers the right amount of incentive to get it done.

Yes, after all of that we picked grey.

4 thoughts on “Stop the Presses!”