You would think after spending seven months waiting for this house, three months in this house and hearing “there’s a problem” from our contractor countless times that we would eventually learn nothing is easy or simple when it comes to an old house.

Let me start at the beginning.  Before we even had the keys in our hands we knew we wanted a sputnik chandelier for over the dining room table.  We watched them on ebay sell for way more than we were willing to spend, but we had hope that one day we would get one.  We mentioned to our friends at Rocket City Retro to keep an eye out for one for us.  Turns out they had one in their back room.  Only problem was that someone had painted it silver and the paint was flaking off.  It was ours if we wanted another project.  So, we bought it with the hopes that we would be able to have it restored to it’s original brassy beauty.

We had it sandblasted to get the paint of of it.  That left it a sparkly champagne color and actually kind of pretty.

We took it to a lighting store to see about having the sockets removed so that we could have it powder coated to be shiney again.  Turns out that with 24 arms that would require a lot of work and subsequently a lot of money.  We decided to leave it the sandblasted color which was slowly growing on us.  We asked the lighting guys to extend the stem and skipped on our merry way.  Ok, it was more like drove away in a hot car with a cranky three-year-old.

After about two weeks we got the sputnik back and new problems surfaced, or there were new problems on the surface.  Turns out the lighting guys didn’t wear gloves when they were working on the light, so the oil from their hands created dark brown/black spots on the sandblasted brass (bad blogger Morgen didn’t get pictures of that part of the process- looking at it made me sad).  I decided it wasn’t worth the money to have it re-sandblasted (I’m cheap like that).  So, I tried cleaning it.  First with 409 (fail), then with steal wool.  The steal wool probably would have worked if I had tiny hands and a week of free time.  So, I did the unthinkable, I spray painted it again.  Rustoleum makes a spray paint that is very close to the color of the sandblasted brass, Champagne Mist. 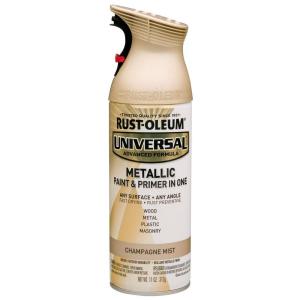 I was planning on spray painting the stem of the light anyway since it didn’t match the light.  I misted it just enough on the sputnik to cover the oil marks and trying to keep the sparkle of the sandblasted brass.  I then used a clear coat in matte to seal it and hopefully prevent any future oil marks.  Unfortunately, it lost a little of it’s sparkle, but the sparkle was very subtle.  And if I ever want it back I can cough up the $30 and have it sandblasted again.  Only this time we will make sure to seal it right away and stop oil marks before they can happen.

This post turned out way longer than I thought it would, so it will be continued with a part 2 where you will learn why things are never simple with old houses, and hopefully a final post when it’s hung up.

It’s different.  It’s unique.  And hopefully when it’s hung it will look amazing.  Check back soon for part 2.

One thought on “Adventures in Lighting, Part 1”