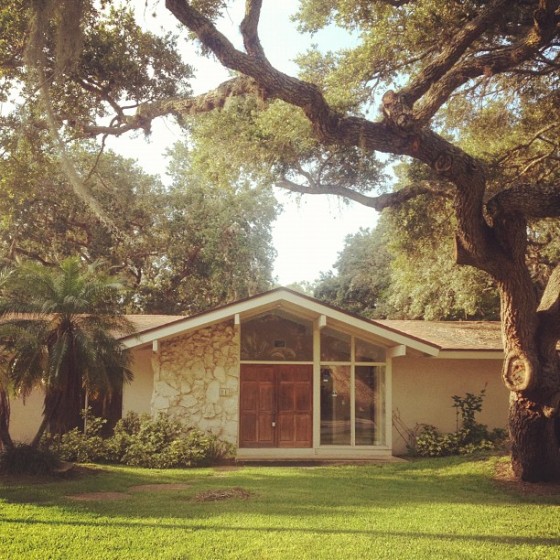 When we first moved in we knew we wanted to paint the big wall – that you can see through the windows – a great color.  This picture was taken just before we had the outside repainted.  You can see the big wall in the front hall that is screaming for some color.  It just wants to stand out.  We waited until after the house was painted to choose a color. 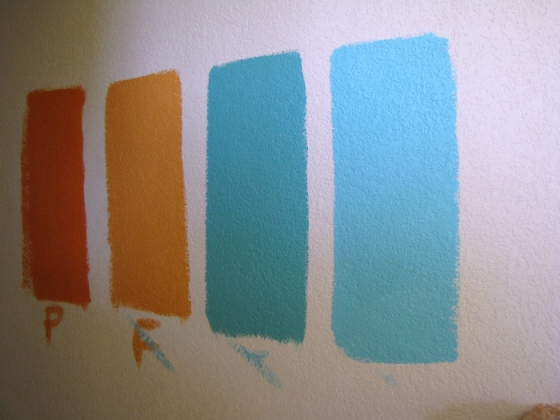 We were stuck between an orange hue and a turquoise/aqua hue.  Ultimately, we decided on Duck Egg by Martha Stewart (surprisingly, not one of the samples we had painted on the wall).  The blue/green wouldn’t be too overwhelming when coming into the house.  And, since we wanted to have the color wrap around into the living room, we figured an orange wall and an orange couch might just be a little too much, you know, orange. 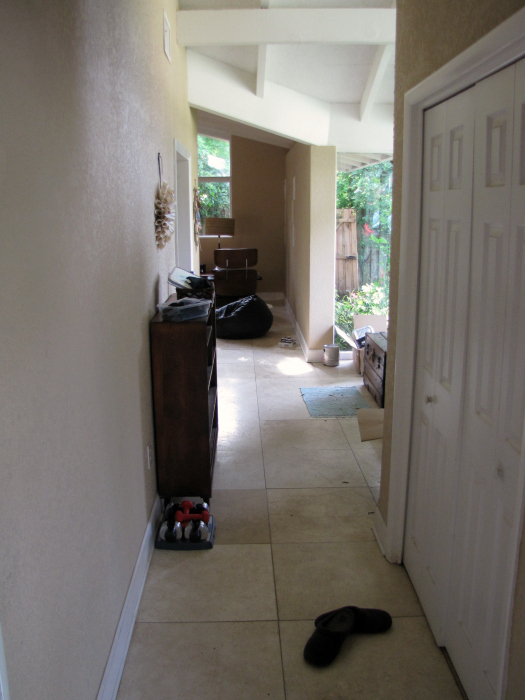 This is the only before picture I can find, but it gives you the general idea.  A long, skinny area that opens up into 3 rooms and is lined with floor to ceiling windows.  You might have remembered a small picture of the area as our storage area for the kitchen project. 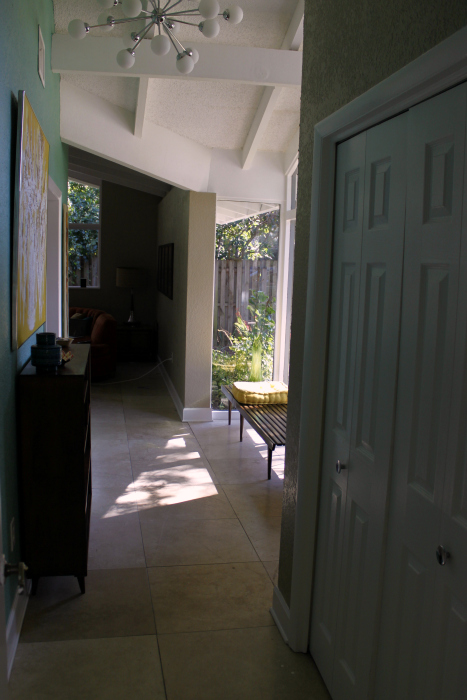 This is the area now.  A bit of an improvement.  As you will notice there is the awesome new color on the big accent wall,  a fun new light fixture, and some new furniture. 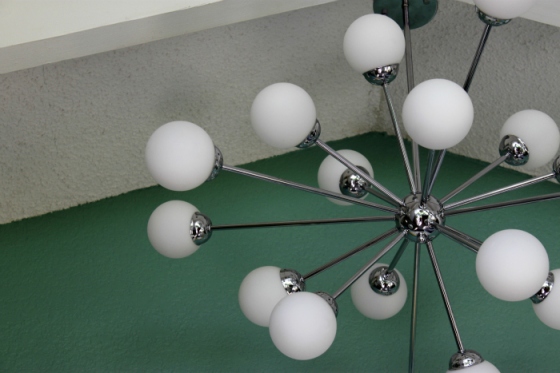 Isn’t it fun?  It’s a modern light that seems to have been inspired  by the Sputnik light .  Those globes are terrifying to put on.  I was positive that I was going to break one.  We plan on putting up a tongue and groove ceiling to cover the popcorn ceiling… someday. 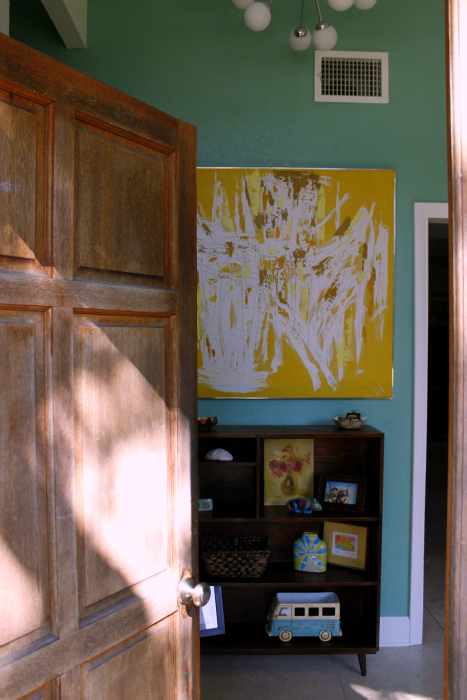 This is the view that welcomes you when you open our front door.  Since the front door doesn’t open all the way (it scrapes against the floor, it’s on the list of things to do), this is exactly what you see when you open the door. 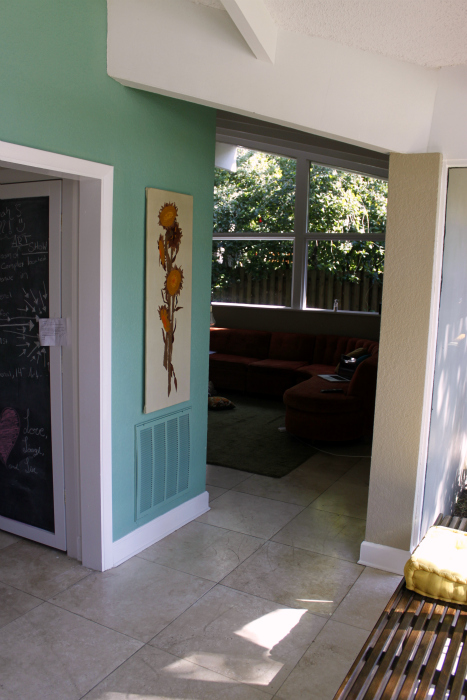 To the right is the living room and kitchen. 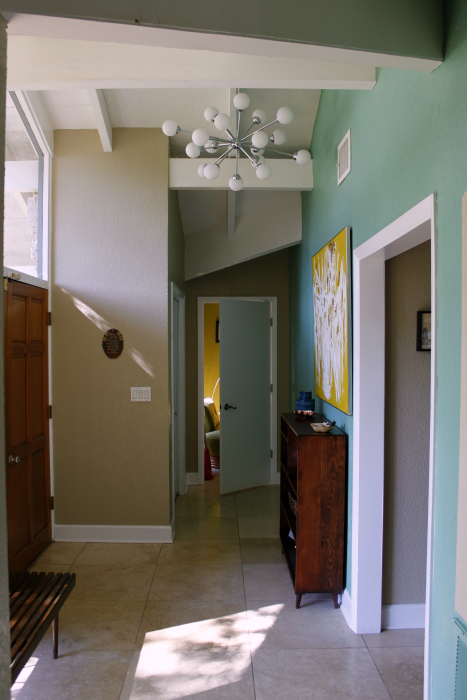 To the left is the hall closet and the office door.  The plaque on the wall belonged to Jamie’s grandmother.  It’s the serenity prayer.  A good reminder when you leave the house.  The slat bench that is sitting in front of the windows is from our favorite Rocket City Retro. 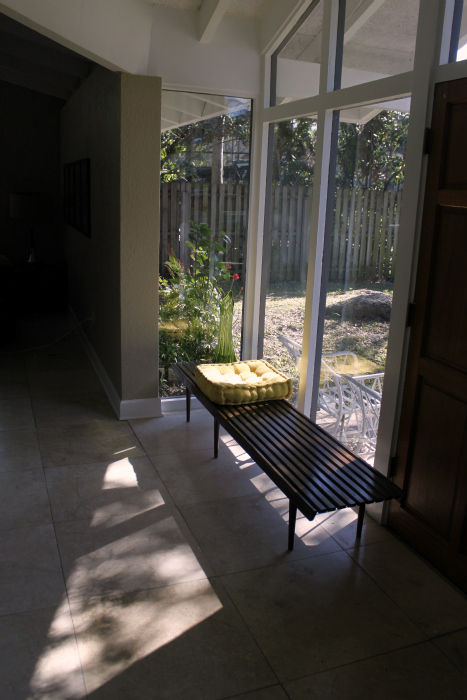 It’s probably 7 feet long.  I love it, but I was worried that it would just end up being a place to put on shoes or a catch all, but I have actually seen my daughter reading on it and the boys sit there and play video games.  Yay! 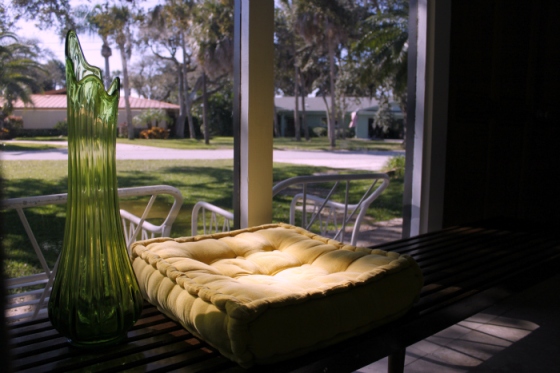 But I can see why they like it.  It’s such a great view of our neighborhood. 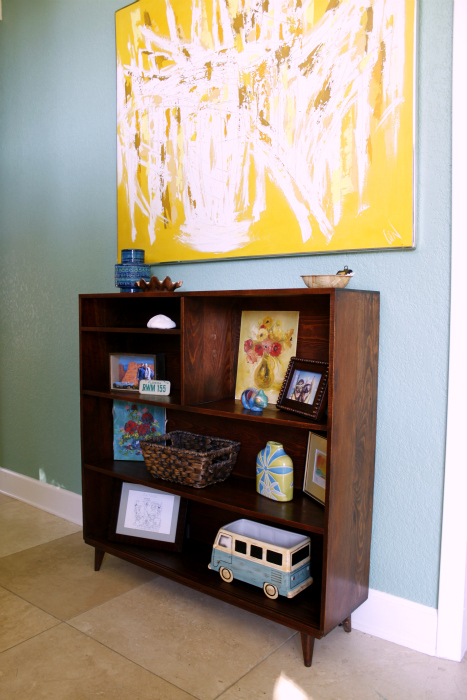 The bookcase was a $10 find from Goodwill.  It might have been one of those times that I saw it, grabbed it and dragged it around with me so no one else would buy it.  The painting above it is also from Rocket City Retro. We love the bright yellow against the aqua. It’s so yummy.  The bookcase is home to one of my Christmas presents (the awesome blue vase on the top), some of my favorite little paintings (including a picture my sister drew of The Jetsons), and a few pictures from our travels. 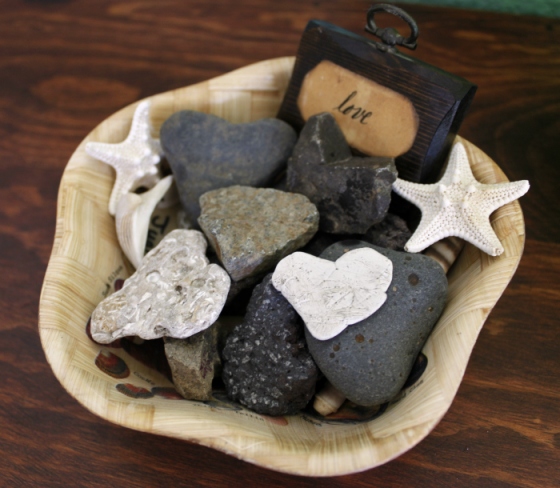 And on the top is our bowl of love.  It holds all the different heart shaped stones and shells that we have found (including one from Mount Saint Helen’s).  We have found them on the beach and on our travels.  It’s a fun reminder that love is all around us.   You just have to keep your eyes open and you are bound to find it.

That’s our front hall!  We’re pretty happy with how it’s coming along.  Maybe a rug, maybe a little more art on the big wall, but those things can come over time.

There are still some things to do, but they are back burner projects.

2 thoughts on “Our Welcome Center”